Many people have asked me and wondered how our Christmas is with 7 boys. Well, here is a small glimpse into our world.
Our Christmas Eve started with Mass at 4pm (Well, cleaning the house before that...). We had a lovely picture in front of the tree and then headed off to St. Patrick Church. Mass was very pleasant as the Children's Choir sang. 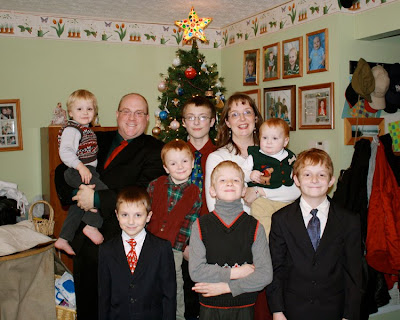 We had our evening meal; our traditional Steak and Shrimp with my wife's family. Most of the boys don't like steak or shrimp so they had other boring food. And then hung out with the kids until we sent them to bed at 8pm. Everyone was very excited so it was tough to get them motivated to sleep. Joseph, despite not having had a nap, stayed up until after 10pm! It was like pulling teeth to get him to sleep. He must have been so excited!
Finally everyone was asleep, we went to gather the presents. The next hour was spent arranging and such. I unpacked the "Band Hero" I purchased on the door busters after Thanksgiving. I was so excited to play it! I Rock on easy.
Sleep at 12:30am. Holly heard footsteps at 2:30am but didn't wake me to investigate. I woke at 5:10am, shortly after Nicholas (4yo) came in and said, "Santa Really came!" He was so cute! Shortly after, we heard the footsteps of all the children heading up the stairs from their room in the basement. I thought I would head off any early present-opening so I headed downstairs. Stockings were pulled down and candy gotten into. Everyone ran around guessing what they got. Slowly Aunt Amy & Grandpa got up. Eventually Mom and the others woke up.
Then our 13yo Daniel revealed that he had been awake on and off since about 1am. He played with the guitar and drums from Band Hero and tried to peak at presents. He said he was awake almost all night.
Finally, about 6:45am we decided to start the opening of the presents. We generally appoint a Santa to pass out presents. In the beginning when we had less than three children, we would pass out individually and watch others open their presents. You can imagine in a family of our size, that wouldn't work very well. We'd be there opening presents all day. So, our appointed Santa simply passes presents to people and we all open on our own time. The drawback of that is we don't get to see reactions as much and sometimes miss what people open. However, the good thing is it's all done in about 45 minutes.
Here is our annual video from this year:
After all this, we play all day. We try to keep the trash under control but it normally doesn't work. At the end, our garbage container is full and we have 4 kitchen garbage bags full of garbage. This is not including the mountain of cardboard from the boxes the presents came in (and packaging for toys); those will go to the recycle later.
Around 3pm we have Christmas Dinner but we've been eating candy all day so nobody really eats that much, especially the children. More playing until we send them to bed. We then crash with an early night.
at 12/25/2010 06:03:00 AM