My Own Tribute to Paul

I would like to say a few words about my best friend.  Paul Benjamin Anthony Deemer was born on the same day as my son Paul Michael John Paul Deliduka. July 26. But I didn't meet him until about 1999 when Holly and I moved to Columbus, Ohio and started going to mass at St. Patrick Church.

Erin went to Franciscan University like us but we didn't really know her. Holly recognized her so we struck up a conversation with them one day and we all became immediate friends. The Deemers were so inviting and friendly. We had countless afternoons and evenings, Sundays and Holidays together. At the time they had two children just like us. Two girls, we had two boys.

Paul and I would go out for beer and wings every chance we got. Paul set the limit, however, that he would never leave the house before the children were in bed; 8:30pm. Family was always first, #1, and I respected that. It was inspiring to me even then because I would have been like, "Honey, I'm going out, can you put the kids to bed?" But no, he always made sure he prayed with this children, gave them blessings and put them to bed before leaving the house.

Our Jonathan was born in 2001 and we asked the Deemers to be his God parents. Within a few months of that they moved away to Ann Arbor, Michigan but we vowed to keep in touch.

Paul and I both worked online and we chatted often on AOL Instant Messenger. One day he says to me. "Tom, Findlay, Ohio is about 1 1/2 hours from you and the same for me. What if we met there at a place called Fricker's and have beer and wings?"  I was all in. Of course, as you can imagine, we could not leave the house until the children were in bed, even then so we would leave and get to Fricker's at 10:00pm. We would stay there and talk, eat, and drink, and then head home about 1am. Sometimes it would be as late as 2 or 2:30am which would put us home about 4am. But it was worth it!

Paul was always a friend to me. He sought me out many times to get together when the time had been too far between visits. We would get on the phone shortly after leaving the house, talk all the way up, talk while we visited, and then talked all the way home.

Things in my life that Paul has inspired in me are so numerous. I would like to list them all but I will no doubt forget them.  My online name, "Tomnibus" was his idea. He said that I had so much information in my head that I was like a big Omnibus. So he called me Tomnibus.

Paul was an Actuary and Chief Financial Officer. I would go to him whenever I had financial questions  he has talked me into and out of many many things. I am so grateful for his knowledge.

Paul is the reason why I became the Director of IT at the Columbus Museum of Art. I was sitting in a cubical in 2006 as a consultant writing code when he e-mailed me to say he was named Vice-President of his insurance company. I thought to myself, "Wow, this guy is a year younger than me and already this successful, I have to do something with my life!" That very day I had a call from the Art Museum and I jumped all over it.

He helped paint my house for "work equity" so we could buy it. I helped him move a huge pile of dirt to his backyard. The wheel barrow in our garage was his that he left behind for me when they moved to Michigan. Erin and he introduced us to "Fiesta Chicken" that we had on the feast of Our Lady of Guadalupe.

We were preparing to get together for a visit in Findlay one October evening when I received a text message from Paul. He was sick, throwing up, back pains. Thought he had a stomach bug. He had to cancel, "Maybe we can look into next week."  I was sad but okay, it wasn't be the first time we had to cancel. Over the next few days I didn't hear from him. I e-mailed him and he said he had to talk to me but wanted to call me and he would soon. I patiently waited. A few weeks went by and I tried again.  His e-mail back was simply, "Call me....". I called him and he went on to tell me how that night he got so sick, the next day Erin took him to the ER and there was something wrong. By the end of the weekend they had diagnosed him with Esophageal Cancer and not only that, it was in his lymph nodes and his liver; Stage 4.

I started to cry, he would have none of that. Over the next 16 months we talked, e-mailed, it became less over time. We did get to meet one time during his treatments. It was a good evening. After a bit it seemed he was in the clear. But then things got worse. I got an e-mail from him saying it was coming back faster. He said he wanted to see me but he would contact me.

A couple months went by, I asked him how he was doing, the e-mail back was: "Not good, we should talk." We never got to talk. Just before Christmas Holly had this feeling that things were going very badly. We contacted Erin, asked if we should be dropping everything to come up. She said, "Well, you shouldn't drop everything but we should plan a visit." 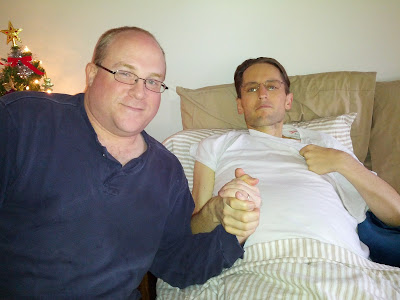 We set a date for December 29. When the time came, Holly was sick. We thought it best not to bring it to Paul. We set it for the next weekend, January 5. Holly was still sick. So we postponed another week to January 12. Late on the 10th Erin wrote me saying, "I think you should consider coming Friday. He is not doing well." So, we made arrangements with our family and drove up the next morning.

It was a perfect day for me. I got to talk to my best friend. I asked him if he was ready. He said, "yes". We shared a beer. It was wonderful and I thank God for that gift of just two hours with him.  We drove home and I learned the next day he had gotten worse, unable to speak or stay awake for very long. Sunday the Lord took him to Himself. At the time of his death, I was having beer and wings celebrating my son's 3rd birthday. How amazing is that?

Paul taught me the value of family and family life. Sadly, I don't know if I followed his example over the last few years but I am turning over a new leaf. Holly and I were inspired by his love for his family that we're going to strive to make major changes in our family. Spend more time with the children, put them first.  We're going to need some help, Paul, I'll be asking for your intercession.

I haven't read this whole thing over again so I apologize for any dis-jointed or rambling that I did. I feel that I wasn't able to explain everything this man has been do me. I don't think anyone will ever know. Paul is the kind of friend you find once in a lifetime. I am blessed to have had the time with him that I did.
at 1/18/2013 10:17:00 PM